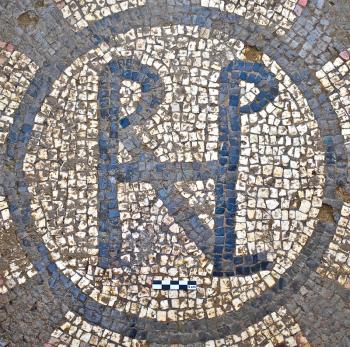 At Gerace near Enna in Sicily, excavation on a Roman villa-estate has revealed a freestanding bath house erected ca. 380 CE. It may never have been completed; one of three pools in its cold room was never installed, and the room’s wall decoration was left unfinished. An unusual feature is the use of pisé (rammed earth) construction in one internal wall as insulation material. The baths were in use until an earthquake struck between 450 and 500 CE. A short-lived repair program was followed by systematic stripping of reusable material; mosaics were smashed in heated rooms to retrieve bricks, and marble panels were removed from walls. By contrast, the cold room’s mosaic was intact. It carries an inscription around all four sides of the room that gives us the estate name, the praedia Philippianorum (the estate of the Philippiani), and refers also to Asclepiades and Capitolini. All three appear again in the center of the floor as monograms, a rare occurrence of such use in the provinces. The text of the inscription is discussed, and alternative interpretations of what it might mean are offered. Tile-stamp designs featuring horses and considerable quantities of equid bones suggest there was a stud farm on the estate.

By R.J.A. Wilson with an appendix by Mariangela Liuzzo