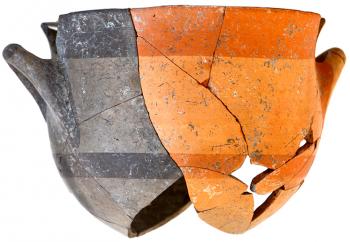 This article presents the results of the first excavations at the site of ancient Eleon in eastern Boeotia, Greece. Fieldwork focused on the elevated limestone ridge on the western edge of the village of Arma about 14 km east of Thebes. The chronological framework of the excavated remains includes pottery dating from Early Helladic II through early Middle Helladic found in secondary contexts and not associated with any architectural remains. Funerary activity began during the Middle Helladic period, reaching a peak both in terms of the number of graves and monumentality in Late Helladic I. An impressive burial complex, the Blue Stone Structure, is contemporary with other cemeteries of the Shaft Grave period in southern and central Greece. During the Mycenaean Palatial period, contemporary with references to the toponym e-re-o-ni (Eleon) in Linear B tablets found at Thebes, activity on the site included significant craft production. Occupation continued directly into Postpalatial periods (Late Helladic IIIC Early and Middle), through several phases of building, destruction, and reconstruction. By the sixth century BCE, the construction of the large polygonal wall along the eastern edge of the plateau and an array of ceramics and figurines, of local, Corinthian, and Attic origins in secondary deposition, indicate renewed occupation.