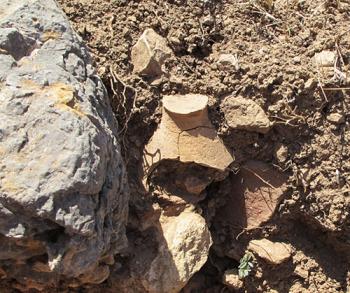 Agricultural production and the palatial redistribution of staples have played a key role in the debate concerning the emergence of social complexity in Minoan Crete. However, much of the focus has fallen on major settlements where such products were consumed, rather than on the landscape where agricultural surplus was produced. While there is no shortage of landscape surveys on Crete, their emphasis has typically been on the distribution of rural settlements instead of on identifying landscape structures and
arrangements—such as terraces, enclosures, and field systems—that might provide data about a territory’s economic focus. A key aim of the new survey at Palaikastro has been to address this bias. By combining extensive archaeological survey with differential GPS (DGPS) measurements, high-resolution aerial photography, and microrelief generation and analysis, the project has identified hundreds of structures, forming an almost continuous fossilized landscape and providing important clues on landscape management practices. The results highlight the importance of pastoral practices, to which a large part of the landscape was dedicated. Agricultural arrangements were also documented in the form of terraced areas adapted for dryland agriculture and reflecting concerns for soil retention. We argue that a highly structured landscape, indicative of pressures in land use, was established during the Middle and Late Minoan periods across Palaikastro’s territory.

By Hector A. Orengo and Carl Knappett