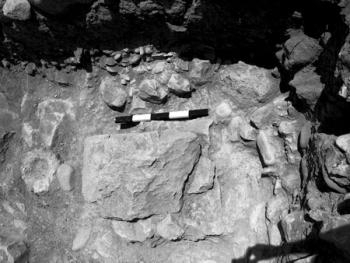 In 2010, a portion of a well-preserved domestic building dating to the later part of Early Minoan (EM) I was excavated at Priniatikos Pyrgos, east Crete. Though only a small portion of this house was available to investigate, there was clear evidence for several architectural and habitation phases. The final domestic activities were particularly well preserved because the building was deliberately destroyed in an event that included burning. There was a distinct and clearly defined ritual component to this event, including the decommissioning of household objects. Because of the rapid abandonment and destruction of this building, the excavated area contained well-preserved evidence for the character of use of the building in its final days. This preliminary discussion focuses primarily on this portion of the house and contextualizes it within the overall excavation at Priniatikos Pyrgos, its environs recorded in the Vrokastro Survey Project, and EM I Crete more generally. It provides detailed analyses of industrial, domestic, trade, and ritual activities through the study of stratigraphy, architecture, ceramics, faunal remains, plant remains, obsidian, metal, and plaster. It concludes with a discussion of the character of activity that took place when the building was abandoned.