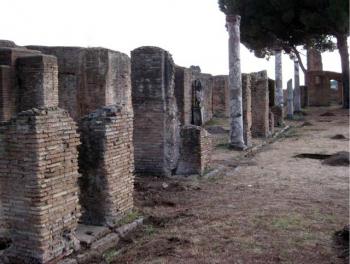 This article presents the work of the University of Kent section of the Late Antique Ostia Project, which since 2008 has studied the evolution of public space in the central area of the city, in conjunction with the Humboldt University of Berlin. This research has sought to detect and document Late Antique remains within a clearance-excavated classical site using minimally invasive methods. It has demonstrated that Ostia saw a level of investment in secular public buildings that surpassed other cities in Italy outside of Rome. Thus, Russell Meiggs’ view that the construction of Portus led to the demise of Ostia, in terms of its political and economic vitality, now seems unlikely. Until the mid fifth century, Ostia was still significant as a center of political representation that followed the urban fashions of the age, which now came from the eastern Mediterranean rather than from Rome. English summaries of the work of the Berlin team are provided by its director, Axel Gering; that work is published in greater detail in a parallel report in Römische Mitteilungen.