Many scholars who study ancient Roman urbanism and sustainability have recognized in recent years that water holds an eminent position as a resource in the Roman world. It is embedded in every aspect of life and must be considered widely in an evaluation of its importance—cultural, technological, religious, and natural factors have always influenced the responses to this universal human need. We in the 21st century are in a moment of “resource awareness.” We understand that resource usage is, like all aspects of human activities, experienced through a host of conscious and unconscious decisions motivated by social culture, technology, and the object’s physical properties. The path to this 21st-century resource awareness has recently been trailed by the growth of sustainability and development studies.

Locicero’s study aims to create a methodological bridge between the rich archaeological evidence from Roman Ostia, at the mouth of the Tiber, and the burgeoning field of contemporary urban resource management. Locicero explores the limits and expressions of Roman resource usage and focuses on how Roman cities managed issues of water supply, use, and drainage. He examines, again by way of Ostia, how the urban landscape of a Roman city reacted to its changing hydraulic needs. More than a century of excavation has revealed an incredible wealth of water features from nearly all periods of Ostia’s history. As part of his mandate to identify the means by which the city reacted to its constant need for water, Locicero masterfully uses this case study for elucidating Roman perceptions of the environment, the sustainability of Roman urbanism, and wider historical patterns of resource usage.

The traditional view that Roman water use was decadently abused and that Romans were an extremely wasteful society oblivious or ignorant of their local landscapes, especially because of opulent bath buildings in Rome and their aqueducts marching across the landscape, is revisited and analyzed with more fine-tuned archaeological evidence. Indeed, numerous Roman authors themselves praise the conquest of Roman architecture over the landscape (e.g., Rutilius Namatianus, De reditu suo, 1.15–19, with the topos of Rome’s hydraulic glory, still in use in the early fifth century CE). These Roman encomia have become increasingly scrutinized following the explosion of literary, historical, and archaeological research conducted in the past century.

Ostia displayed a dynamically changing population through the centuries. Meiggs estimated a population of 50,000–60,000 inhabitants at the height of Ostia’s prosperity in the Antonine period, based on an intramural area of only 69 ha (Roman Ostia, Clarendon Press 1973, 532), although he admits that precise population numbers were never really attainable by city magistrates because women, children, and enslaved people were not required to be registered for any official purpose. As Meiggs also points out (p. 532), nearly all writers on Ostia have ventured a figure for the populations at various times, and estimates range from 10,000 to 100,000. This population, coupled with culturally specific expressions of hygiene, entertainment, and living standards, created the need for an equally responsive hydraulic system, acting in constant dialogue with the larger socioeconomic trends in the Mediterranean world.

The seven chapters of Locicero’s book address theory, methodology, diachronic discussion, and conclusion, and they cover three distinct urban areas of Ostia: Insula III, i; Insula IV, ii; and Insula V, ii. Chapter 1 (14–31) presents a review of Roman water research, sketching out the development of the field from the Roman writer Frontinus in the first century CE to recent advances in hydrogeological analyses at Ostia and at other Roman sites in Italy. Also in this chapter Locicero presents the extensive archaeological work already carried out on the water systems of Ostia to date, acknowledges the achievements of previous hydraulic researchers, and contextualizes his own study. He briefly describes the history of the excavations of Ostia, especially of the mid 20th century, as they shaped our conception of the urban form and hydraulic evidence of Ostia in profound ways. The particular choices that archaeologists made in the period had significant consequences for our understanding of Roman urbanism in Ostia in the third century CE and later.

One of the most innovative angles to Locicero’s study is that he presents the environmental setting of Ostia, to show how many different types of water existed within, below, and around the city. While the literature on the urban development of Ostia is immense (and, of course, much of it based on the seminal work of Meiggs 1973), Locicero summarizes it here to bring out the larger urban forces at play in different periods of the city’s life. This also provides a chronological structure within which to place the city’s numerous infrastructure networks.

Chapter 2 (32–49) lays out the theoretical and methodological underpinnings of the whole study. Locicero engages with recent debates in materiality and phenomenology, as well as recent developments in sociocultural studies, to demonstrate new ways of thinking about water. His approach is striking and opens up myriad horizons for questioning our current and past ideas of the relationship humans had with water in the ancient Roman world. Shifting from the cultural to the urban, Locicero presents recent work on Roman urbanism and approaches to modern urban infrastructure, such as the concept of urban metabolism (the notion that cities function like human bodies, being composed of numerous interlocking systems that require energy and produce waste), as well as providing a brief introduction to sustainability and, more precisely, sustainable resource management, in order to investigate how urban water usage is studied today. Combining these different streams of inquiry, we come to understand the methodology created for this study, which he dubs the “Roman water footprint,” which offers a framework for creating a comprehensive snapshot of water usage in a Roman city—an accomplishment well worth the effort. In this way, Locicero is able to apply an approach used in studying issues related to modern water to an investigation of Roman water usage. His strategy is really quite ingenious. After carefully laying out the theoretical and historical framework for the city of Ostia, Locicero presents his three case studies, the city blocks designated III, i; IV, ii; and V, ii, which represent different chronological periods and contain different archaeological realities (fig. 1). 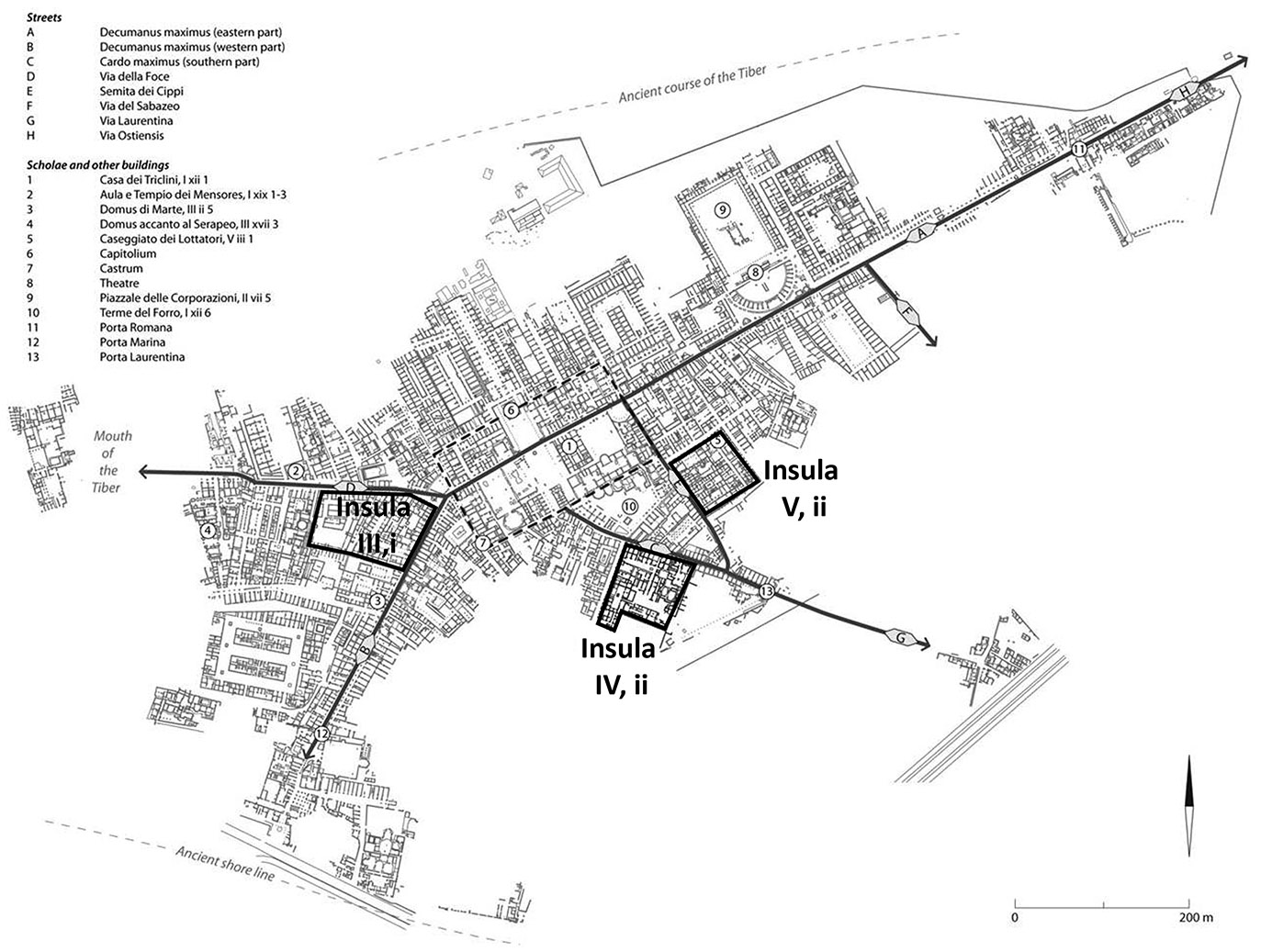 Each of Locicero’s case studies involves five or six concise sections: an introduction to the area of the city, the methodology, data conclusion, water footprint, diachronic analysis, and conclusion. His point is that this method highlights different levels of the infrastructure systems, moving from the level of an individual lead pipe, to a bath building, and finally to all the plumbing features of entire city insulae. By assembling all contemporary water features within an insula, these chapters demonstrate how water usage in each city block changed through time. Locicero’s efforts yield remarkable clarity and precision.

Insula III, i, is located in the western part of Ostia in the direction of the river’s mouth, between the angle formed by the continuation of the Decumanus Maximus to the southwest and the Via della Foce (covered in ch. 3, 50–125; see fig. 1). Locicero’s choice of this insula comes from its wealth of surviving structures from the third and fourth centuries CE, including the so-called Basilica Cristiana. Because it has not been well published, this insula becomes an apt methodological comparison with the better-published insulae also discussed in Locicero’s study.

Insula IV, ii (ch. 4, 126–203) involves an interconnected group of buildings located along the southern stretch of the Cardo Maximus, and it was tightly integrated into the urban network. This insula encompassed many spaces of dynamic interchangeability, which included structures for domestic, religious, industrial, and entertainment purposes. The diversity of structures present and the distribution of water features make it an excellent case study.

I have to agree with Locicero’s own assessment that his study of Insula V, ii (ch. 5, 204–94) is arguably completely original and we cannot point to a similar study that has ever been done elsewhere in the entire Roman world: he has presented one insula in stunning detail and integrated its water systems and architecture . This insula lies southeast of Ostia’s forum, and like Insula IV, ii, also contains a variety of structures. Locicero wisely builds on the meticulous previous publications by Johannes Boersma and incorporates the excavation and restoration projects carried out by Roberto Petriaggi. It appears that Insula V, ii was not well connected to the hydraulic systems of Ostia for the first several centuries of its existence, but the situation began to change in the third and fourth centuries CE. Now, neighboring buildings become increasingly connected hydraulically, certainly in terms of drainage systems. The evidence from this insula enriches the discussion about Late Antique infrastructure of Ostia, as well as the chronology and distribution of Ostia’s sewer network.

Chapter 6 (295–319) analyzes large-scale trends of urban water usage at Ostia by comparing Locicero’s “water footprint” in all three insulae. Such a spatial comparison highlights common trajectories and particular differences in separate areas of the city. Locicero, never afraid to put forth unaccustomed perspectives, offers different ideas on the role of water in Ostia’s history and creates a more nuanced picture of urban life in Ostia. Rather than a city of discretely separated homes, workshops, and religious buildings, the hydraulic evidence presents a city in which neighboring buildings of different function share water systems, Republican water features stubbornly influence building layout centuries later, and sewers are found sometimes lying above ground. Such discoveries are new and exciting.

Chapter 7 (320–23) demonstrates the potential for increased collaboration between urban specialists of all time periods. We are treated to the implications of a dialogue between first- and 21st-century water usage, and Locicero’s final remarks suggest there can be further development and future application of the “Roman water footprint.”

Several appendices conclude this study, with appendix 1 providing several pieces of epigraphic data from the three insulae studied. Appendix 2 lists every water-related feature for each insula, as well as some additional information for each. All photographs in this study were taken by the author unless otherwise noted, and the thoroughness and care with which everything has been put together will make this volume a starting place for further Ostian studies for many years to come.