This volume publishes all stone reliefs and fragments of reliefs found in the excavations of the Athenian Agora from 1931 to “the present” (ca. 2015), 224 in number (except 135 dedications to the Mother of the Gods, to be published separately). The author’s aims are to describe and discuss each relief and determine what it can contribute to the religious topography of the Agora and its vicinity and to our understanding of the various cults in this area. The volume, exemplifying the high standards of the Athenian Agora series, succeeds admirably.

The introduction (ch. 1) presents a brief history of the excavations, history of scholarship on the reliefs, their chronology, a general discussion of the divinities and their shrines (including color photographs of noteworthy reliefs and two very helpful plans), the dedicators, production, and important summary discussions of iconography and function.

In chapters 2–4, each section begins with a summary discussion concerning a god, hero, or group, followed by catalogue entries. The initial summaries typically compare the Agora reliefs with reliefs found in other sanctuaries and discuss their iconography in general terms; in addition, the reliefs are analyzed as evidence for the nature and ritual of the shrine or sanctuary from which they derive. The catalogue entries include, in addition to physical description and bibliography, detailed commentary on the identification of the figures and questions of iconography. These commentaries on individual works are the heart of the volume and the basis of the summary discussions at the start of each chapter. The depth of research and discussion is impressive, and overall the author’s interpretations are convincing or, in difficult cases, contribute significantly and helpfully to the discussion. 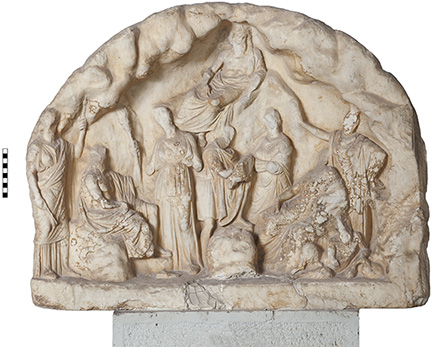 We may consider closely two well-known difficult cases. Catalogue number 13 is the most magnificent relief, dedicated by Neoptolemos son of Antikles ca. 325 B.C.E. (fig. 1). The author notes that the scene, framed by a grotto, “has been almost universally accepted” as depicting “Hermes presenting the baby Dionysos to the Nymphs of Mt. Nysa, with Demeter, Apollo, and Artemis standing by on the left, Pan and Acheloos attending the scene on the right, and Zeus looking on from above” (33). She rightly finds more satisfactory Despinis’ view (“Zum Weiherelief des Neoptolemos im Athener Agora-Museum,” AA 1 [2009] 11–19) that “the relief shows the Nymphs in the cave on the north slope of the Acropolis handing Ion to Hermes” (33), thus linking the scene to Apollo’s rape of Creusa, her abandonment of her baby on the north slope, and his rescue by Hermes, who took him to Delphi. Although the central figure is generally identified as Hermes because of his short chiton and chlamys, it is noteworthy that the figure’s height is shorter than that of all the other standing figures, and he lacks definitive attributes of Hermes (petasos, kerykeion, winged sandals); it therefore raises the question whether he may be a mortal, namely Neoptolemos himself presenting something to this group of divinities (it is hard to tell whether the nymph, whose left arm is broken away, is presenting or receiving). Despinis was impressed by apparent topographic allusions to shrines on the north slope: Demeter, standing at the left edge, to the Eleusinion; Apollo, to the shrine of Apollo Hypo Makrais; Pan and the nymphs, to the cave of Pan; and Zeus, to a cave supposedly higher up. But a shrine to which Artemis alludes, Lawton points out, is hard to identify, and the evidence for Zeus’ cave she regards as “inconclusive” (34). However, Aeschylus Ag 55–9, is relevant; the choral passage can most plausibly be understood as a reference to gods on the northwest slope (K. Clinton, “Apollo, Pan, and Zeus, Avengers of Vultures: Agamemnon, 55–59,” AJP 94 [1973] 282–88): the chorus likens the war cry of the Atreidae to the cry of “vultures who high above their nests whirl in anguish for their stolen young ones,” but ὕπατος δ’ ἀίων ἤ τις Ἀπόλλων ἢ Πὰν ἢ Ζεὺς οἰωνόθροον γόον ὀξυβόαν τῶνδε μετοίκων, ὑστερόποινον πέμπει παραβᾶσιν Ἐρινύν. Apollo, Pan, or Zeus, hearing the cry of the vultures, their fellow dwellers (metoikoi), takes vengeance on those who stole their young. This scene of birds of prey nesting on this slope recurs in the story of Creusa in the Ion, who sets out her son by the cave of Pan to be a meal for birds and animals (500–6). The presence of Artemis as a topographical reference in this relief, however, remains a puzzle, unless she is perhaps associated with Apollo in his shrine. 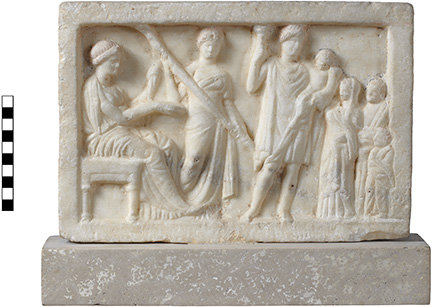 In a relief most likely from the Eleusinion (cat. no. 49), the author identifies as Hermes the figure who stands to the right of Demeter and Kore, holding up a short torch in his right hand, cradling Ploutos and his cornucopia in his left (fig. 2). Although neither a torchbearing Hermes nor a Hermes holding Ploutos is attested, the author rightly points out that his short chiton and chlamys and short hair are appropriate for Hermes, not for Eubouleus, who always holds one or two torches and in some scenes is closely associated with Ploutos, though never holding him (K. Clinton, Myth and Cult: The Iconography of the Eleusinian Mysteries [Stockholm 1992] 56–60, 134–35). This is an important observation. The iconography raises several issues: the roles of Hermes and Eubouleus in Eleusinian art and myth; their position in the cult of the Mysteria; their garments and the torch; and their association with Ploutos.

First, Hermes appears extremely rarely in Eleusinian scenes. Most famously, on a red-figure bell crater in the Metropolitan Museum, he is leading Kore back to her mother, in the company of Hekate (LIMC 4:328, s.v. “Demeter”), a scene that largely reflects the (broadly Hellenic) myth depicted in the Homeric Hymn to Demeter, not the local Eleusinian myth, in which Eubouleus plays this role. On a lekythos in the Archaeological Museum of Sofia, he is present in the company of Eubouleus at the reunion of Demeter and Kore; thus, a figure in the Hymn is joined with the figure playing the same role in local Eleusinian myth (LIMC 4:288, s.v. “Demeter”). Another such combination occurs on a pelike in the Sandford-Graham Collection (LIMC 4:409, s.v. “Demeter”); Hermes can be seen at the left edge, holding his kerykion, while Eubouleus appears more prominently with Dionysos next to Ploutos. Eubouleus appears at least three other times with Ploutos (LIMC 4:403, 404, 408, s.v. “Demeter”).

Second, Hermes was not one of the central gods of the Mysteria. At Eleusis, he received sacrifice as Hermes Enagonios, perhaps at the Reception of Iakchos in the forecourt of the sanctuary (IEleusis 13). The priesthood of Hermes Patroos, the progenitor of the Kerykes, was controlled by this Eleusinian genos (IEleusis 300), but this priest is not associated with the Mysteria. Eubouleus, but not Hermes, appears in Eleusinian sacred laws of the fifth and fourth centuries, in which he is associated with Demeter, Kore, Triptolemos, and the God and the Goddess in a sacrificial context (IEleusis 28, 142). Eubouleus, but not Hermes, was included among all the gods of the Mysteria in the Lakrateides Relief in the last quarter of the second century (IEleusis 300). Thus, a priori we should not expect to find Hermes in close association with Demeter and Kore in a relief from the Athenian Eleusinion.

Third, in fifth-century vase scenes, Eubouleus’ garment is apparently not yet standardized: in two scenes he wears a short chiton with no himation (LIMC 4:24, s.v. “Hades”; 4:388, s.v. “Demeter”), in two others a long chiton, once with chlamys, once with himation (LIMC 4:25, s.v. “Eumolpos”). In the fourth century, he is always dressed in a short chiton with boots and without himation. He usually carries two torches, sometimes one. In catalogue number 49, Hermes with a short torch is unique. In number 50, a similar relief, of mediocre quality, his right arm hangs down and seems to clasp the lower end of Kore’s torch, seemingly sharing it with her.

Fourth, it is stunning to see Hermes holding Ploutos on his arm, in view of his otherwise loose association with him—as a spectator on the Sandford-Graham pelike. That pose, as Thompson (The Athenian Agora: A Guide to the Excavation and Museum [Athens 1976] 193–94; “Dionysos Among the Nymphs in Athens and in Rome,” JWalt 36 [1977] 75–9) and others have pointed out (no matter which god is depicted here), suggests influence from the famous statue of Eirene and Ploutos. Eubouleus holding Ploutos is less of a surprise, as he appears prominently in several scenes with Ploutos.

The figure represented in catalogue numbers 49 and 50 is evidently a hybrid: he has some attributes of Eubouleus in fourth-century painting (torch, short chiton, close association with Ploutos) but also attributes of Hermes (chlamys, short chiton, short hair). The author attributes the presence of Hermes here to his role in the Homeric Hymn to Demeter. This seems very likely, but the creator of this composition also seems to have been influenced by the role of Eubouleus in the Eleusinian version of the myth.

To conclude, this excellent volume, with its wealth of information and observations, is not only fundamental for our understanding and further study of these reliefs and for the evidence they provide about worship, it is also the author’s great merit, through her discussions of iconography and function, to have given us a feeling for what it was like to be in the Agora amid countless similar reliefs.