Theater and Spectacle in the Art of the Roman Empire

Theater and Spectacle in the Art of the Roman Empire

Images of sport and spectacle displayed in public settings, homes, and tombs have long been of interest to scholars, especially as they raise fascinating questions about the social identities of their patrons and the larger significance of ludic events within Roman society. Despite the rich variety and diverse contexts of these images, their potential as historical evidence has yet to be realized fully by philologists and ancient historians, who tend to employ them as illustrative window dressing or, worse, misinterpret their imagery and value entirely. 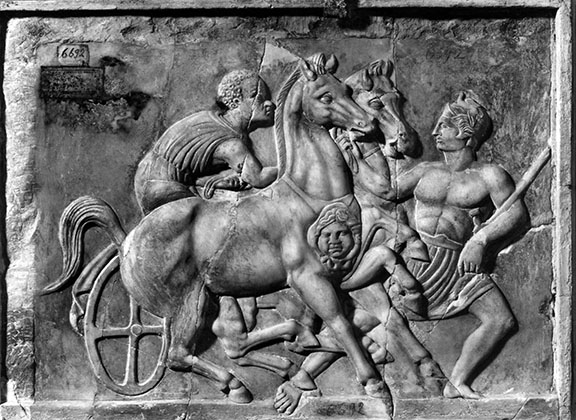 For instance, the relief illustrated here (fig. 1) does not depict an African charioteer preparing for the start of a circus race, as scholars have held for more than a century (e.g., L. Schumacher, Sklaverei in der Antike: Alltag und Schicksal der Unfreien [Munich 2001] 19–20, fig. 2) but rather is a pasticcio that blends together fragments from mythological and historical genre scenes (e.g., Neo-Attic, a victimarius). The failure to compare the relief with other, canonical scenes of chariot racing and to ask why the honorand would choose to be commemorated in this bizarre, unparalleled way represent key, if preventable, oversights in method.

Dunbabin’s new book demonstrates the importance of understanding images and artifacts related to theater and spectacle in the Roman and Late Antique worlds on their own terms. Seen more broadly, her work could be considered a case study of how to analyze visual and material culture as independent categories of evidence with distinct sets of conventions, contexts, and challenges. Indeed, the book is a model of how to integrate art and artifacts judiciously with texts and inscriptions, and it arrives at a salutary moment when studies of Roman sport and spectacle increasingly are making critical use of visual evidence (e.g., A. Puk, Das römische Spielewesen in der Spätantike [Berlin 2014]; M. Flecker, Römische Gladiatorenbilder: Studien zu den Gladiatorenreliefs der späten Republik und der Kaiserzeit aus Italien [Wiesbaden 2015]; J. Latham, Performance, Memory and Processions in Ancient Rome: The Pompa Circensis from the Late Republic to Late Antiquity [Cambridge 2016]; S. Forichon, Les spectateurs du cirque à Rome [du Ier siècle a.C. au VIe siècle p.C.] [Bordeaux forthcoming]).

Dunbabin realizes her ambitious mandate through eight chapters. Chapter 1 outlines the scope of her study, including a brief survey of games and festivals in the Roman world, a discussion of visual methodologies, and a case study of the recently discovered, enigmatic mosaics at Noheda (Spain). In the seven chapters that follow, she treats the visual evidence of Greek festivals, the traditional theater, pantomime and mythological spectacle, mime and popular entertainment, circus races, the amphitheater (gladiators and wild beast hunts), and games in the Christian empire, capped by seven pages of conclusions. The volume contains a helpful glossary, an extensive bibliography, a list of illustrations (a remarkable number of which are reproduced in color, at a large scale, and at very high resolution), and three indices (sites and monuments, ancient sources, and general). The notes are up-to-date and dense, and they clearly reflect their author’s wide learning. The book is lucidly written and clearly argued, and it is accessible to the full range of potential readers, from scholar to student to general audience.

There are many new insights won here by taking a broadly based approach to this heterogeneous corpus of imagery. The most salient of these are helpfully summarized in the conclusion, which has sections on artifact distribution, issues of convention and reality, and the idea of a common culture of spectacle. However, Dunbabin also makes extensive cross-references between chapters and thereby helps the reader draw numerous, smaller connections between object classes and images that have hitherto gone unnoticed. Thus, each chapter repays the careful reader’s attention through the author’s keen eye, sober analysis, and wealth of detail. For this reader at least, Dunbabin is at her best when discussing narrative representations, especially those in relief and mosaic (the categories of evidence she treats most often and many of which she has studied firsthand), but she offers astute observations across the full range of objects onto which the imagery of spectacle insinuated itself (curse tablets, statuettes, ceramic money boxes, and others).

In addition, there is a significant methodological takeaway from the author’s approach. Through her attention to the granular details of specific works and, at the same time, her sensitivity to broader trends across media over time, Dunbabin demonstrates the richly nuanced language of spectacle-related imagery and thus, by extension, the elasticity of its meaning. That is, images could assume different meanings for different audiences, depending on the object’s subject matter, its standardization with or variance from artistic convention, and the circumstances of its commission and display. Thus, scholars who have championed reductive, essentialist, and often literary-based interpretations of these images across visual media (e.g., chariot race = fate) will find themselves on shaky ground; indeed, the straitjackets of symbolism and allegory, insofar as they have been applied to images of spectacles, lack any authority in the evidence assembled here. Dunbabin is wisely skeptical of such unitary explanations and acutely aware of the limits of our knowledge, especially as new discoveries continually expand that understanding, often in significant ways. As she remarks, “We have to reckon with a range of potential significance, sometimes made explicit by inscriptions (which may be lost to us), sometimes implicitly conveyed by a context that would have made the reference apparent to informed contemporary viewers, sometimes left open” (273).

Dunbabin’s study is at once a monumental undertaking in data collection and categorization, exemplified by the highly varied image styles, object types, and find contexts that she canvasses, and a mature meditation on and synthesis of the vast scholarly apparatus that these images have generated. The scope of her coverage is unparalleled, and her command of both the primary sources (literary, epigraphic, artistic, and archaeological) and the secondary literature is masterly. Even those who have been working on these topics for many years will gain fresh insights about their own subject specialisms as well as an enhanced, comparative understanding of their embeddedness within the wider image world of Roman theater, sport, and spectacle.

Book Review of Theater and Spectacle in the Art of the Roman Empire, by Katherine M.D. Dunbabin