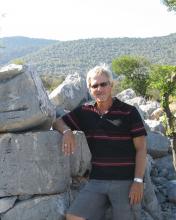 Daniel Pullen is professor of archaeology in the Department of Classics at Florida State University. He received his Ph.D. in anthropology and classical archaeology from Indiana University. He codirects (with Thomas Tartaron of the University of Pennsylvania) the Saronic Harbors Archaeological Research Project (SHARP), exploring Mycenaean expansion into the Saronic Gulf at the walled harbor town of Korphos-Kalamianos and surrounding region. He recently edited the volume Political Economies of the Aegean Bronze Age (Oxford 2010), and his book The Early Bronze Age Village on Tsoungiza Hill appeared in 2011 (Princeton). Currently he is working with Greek and American colleagues on a regional project in southern Greece focusing on the Neolithic Alepotrypa cave of Diros.