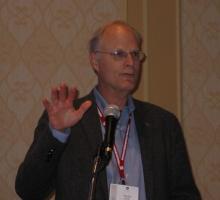 Timothy Earle (B.A., Harvard University 1969; Ph.D., University of Michigan 1973) has been a professor of anthropology at UCLA from 1973 to 1995 and at Northwestern University since 1995. He was director of the Institute of Archaeology at UCLA 1987–1992 and chair of the department at Northwestern 1995–2000 and 2009–2010. He is interested in the evolution of complex societies, prehistoric economies, and material culture. He has conducted archaeological projects in Polynesia (Hawaii), South America (Peru and Argentina), and Europe (Denmark, Iceland, Hungary). His books include Exchange Systems in Prehistory (with J. Ericson [New York 1977]); The Evolution of Human Societies (with A. Johnson [Stanford 1987]); How Chiefs Come to Power (Stanford 1997); Bronze Age Economics (Boulder, Colo. 2002); and Organizing Bronze Age Societies (with K. Kristiansen [New York 2010]). He has been an office holder in the American Anthropological Association and the Society for Economic Anthropology.