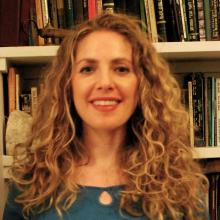 Karen B. Stern is assistant professor of history at Brooklyn College of the City University of New York and specializes in the inscriptions, art, and cultural history of Jewish populations in the late ancient Mediterranean. Educated at Dartmouth College and Brown University, she is a National Endowment for the Humanities Fellow at the Albright Institute of Archaeological Research in Jerusalem (2010–2011) and has served as a visiting scholar at the Getty Villa (2008). She is author of Inscribing Devotion and Death: Archaeological Evidence for Jewish Populations in North Africa (Leiden 2008). Her current research addresses epigraphy and use of space in sacred and mortuary contexts in the late ancient Levant.