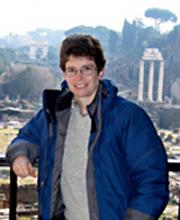 Lynne Lancaster graduated from Virginia Tech with a bachelor of architecture before earning her doctorate in classical archaeology at Oxford University in 1996. In 2001–2002, she was a fellow at the American Academy in Rome. She has published articles on the Colosseum, Trajan’s column, and Trajan’s markets, and in 2005, published Concrete Vaulted Construction in Imperial Rome: Innovations in Context (Cambridge University Press), winner of the 2007 AIA James R. Wiseman Book Award. She is currently working on innovative vaulting in the Roman provinces and is an associate professor in the Department of Classics and World Religions at Ohio University.