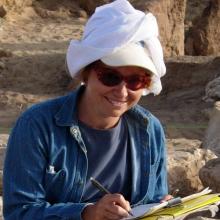 Paola Davoli graduated with a degree in Egyptology from the University of Bologna and earned her doctorate from the same university in 1997. At present, she is associate professor of Egyptology at University of Salento (Lecce). She has codirected, with M. Capasso, the archaeological mission at Soknopaiou Nesos (El-Fayyum) since 2004. Since 2005, she has been the archaeological director of the New York University mission at Amheida (Dakhla Oasis), directed by R.S. Bagnall.