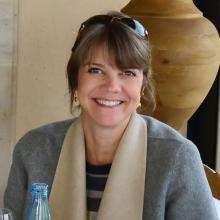 Deborah Carlson is a classical archaeologist specializing in ancient ships and seafaring. She earned an M.A. in classical archaeology from the University of Arizona in 1995, participating in terrestrial excavations in Greece and Italy. Deborah studied nautical archaeology at Texas A&M under George Bass, and earned a Ph.D. in classics from the University of Texas in 2004. That same year she joined the faculty of the Nautical Archaeology Program at Texas A&M University, where she teaches graduate and undergraduate courses in Latin, Greek and Roman archaeology, nautical archaeology, and classical seafaring. She has codirected the excavation of two ancient shipwrecks in Turkish waters and has served as president of the nonprofit Institute of Nautical Archaeology (INA) for the past decade.