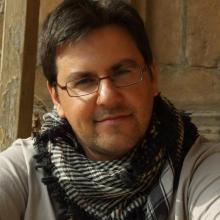 David Fernández Abella is a field and underwater archaeologist specializing in fortifications and maritime archaeology in Roman and medieval times. Since 2003 he has been a researcher at the University of Santiago de Compostela in several research groups. Since 2016 he has been a member of the Sikait Project, an archaeological project of the Autonomous University of Barcelona for the study of emerald mining in the Eastern Desert of Egypt.