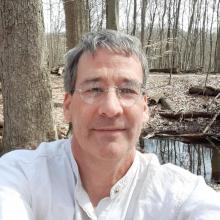 Eric C. Lapp (B.A., Ph.D.) is a lychnologist (a specialist in the use of light in ancient times). He earned his doctorate in religion from Duke University following his studies in geoarchaeology at the College of Wooster. His research and publications focus on the art, trade, technology, and material properties of clay oil lamps from the Roman Near East. He has worked on archaeological excavations in England, Israel, Jordan, and the United States. Growing up in Ohio, Lapp encountered the Adena and Hopewell earthworks of Newark and the quarry pits of Flint Ridge. He has never forgotten his first boyhood adventure to Jamestown in the 1970s, so he found the unearthing of the extraordinary Roman “factory” lamp from this Virginia landscape very special.