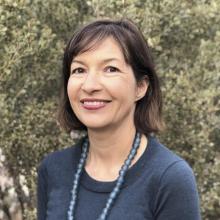 Emma Blake (Ph.D. University of Cambridge, FAAR’13), is Associate Professor of Anthropology at the University of Arizona. She is Editor-in-Chief (with Robert Schon) of the American Journal of Archaeology. Blake is a Mediterranean archaeologist, focusing on identity construction in Italy in the second and first millennia BCE. She is the author of Social Networks and Regional Identity in Bronze Age Italy (Cambridge University Press 2014), as well as numerous articles. She has conducted fieldwork in western Sicily for many years and directs an archaeological field survey tracing the extent of Tunisian influence in western Sicily in all periods. She is co-directing new excavations at the ancient city of Segesta, Sicily.