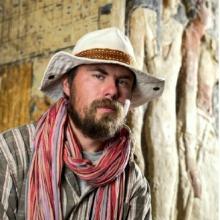 Marek A. Woźniak is a field archaeologist specializing in the archaeology of ancient trade routes in the Hellenistic and Roman periods. Since 2019 he has worked at the Institute of Mediterranean and Oriental Cultures of the Polish Academy of Sciences in the Department of Silk Road Cultures. He has been a member of The Berenike Project since 2009, and since 2012 he has been the supervisor of the project researching the Hellenistic phase of the port city of Berenike on the Red Sea coast.