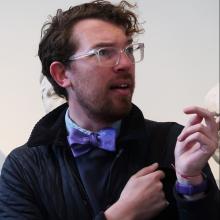 Dylan K. Rogers is Lecturer in Roman Art & Archaeology in the Department of Art at the University of Virginia, having previously served as the Assistant Director of the American School of Classical Studies at Athens from 2015–2019. He is the author of Water Culture in Roman Society (2018) and the co-editor of the volumes, What’s New in Roman Greece? (2018) and The Cambridge Companion to Ancient Athens (2021). In addition to various issues related to Roman water, Rogers' research interests include the relationship between Roman identity and art (especially sculpture and mosaics), Roman religion, the topography of the cities of Rome and Athens, and the reception of Antiquity from the Renaissance through the modern period.