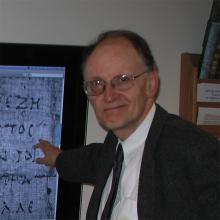 Richard Janko studied at Trinity College, Cambridge, and his scholarship has focused on Bronze Age Greece, Homer, early Greek religion and philosophy, ancient literary criticism, and the reconstruction of ancient books on papyrus rolls. He is currently the Gerald F. Else Distinguished University Professor of Classical Studies at the University of Michigan. He previously taught at St. Andrews, Columbia University, UCLA, and University College London, and has held visiting professorships at the American School of Classical Studies in Athens and at the Aristotelian University of Thessaloniki. He was elected to the American Academy of Arts and Sciences in 2006, the American Philosophical Society in 2009, and the Academy of Athens in 2017. He is working on new editions of the Derveni papyrus and Aristotle’s Poetics.