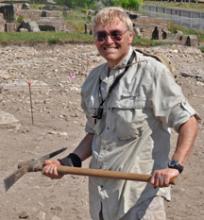 John Pollini is professor of classical art, archaeology, and history and USC Associates Endowed Professor in Art History at the University of Southern California (USC). He received his M.A. and Ph.D. from the University of California, Berkeley. At USC he has served as chair of Art History and dean of the School of Fine Arts. He has received numerous awards and honors, among which are fellowships from the Guggenheim Foundation, the National Endowment for the Humanities, the American Council of Learned Societies, the Fulbright Association, the J. Paul Getty Museum, and Internationales Kolleg Morphomata (University of Cologne). He was Whitehead Professor of Archaeology at the American School of Classical Studies at Athens and Joukowsky Lecturer for the AIA and is a corresponding member of the German Archaeological Institute. He has excavated in Italy and Turkey and has published several books and many articles and reviews dealing with various aspects of Greek and Roman art. His most recent book is From Republic to Empire: Rhetoric, Religion, and Power in the Visual Culture of Ancient Rome (Norman, Okla. 2012). His two current book projects are Augustus Caesar: From Image to Icon and Christian Destruction and Desecration of Images and Temples of Classical Antiquity.