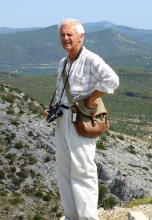 Andrew Moore’s archaeological research has concentrated on the advent of agriculture and sedentary life and their spread to Africa and Eurasia. Moore has conducted field research in Syria, Iraq, Palestine, Croatia and other countries. His research on the early farming site of Abu Hureyra in the Euphrates Valley, begun in the 1970s, continues. He is currently directing a project investigating the arrival of farming in the central Mediterranean. Moore has taught archaeology at the University of Arizona and Yale University and served as Associate Dean in the Graduate School at Yale, and latterly as Dean of the College of Liberal Arts, then Dean of Graduate Studies, at Rochester Institute of Technology (RIT). He is currently Professor and Dean Emeritus at RIT and an Honorary President of the Archaeological Institute of America. Moore’s publications include Village on the Euphrates (with G.C. Hillman and A.J. Legge, Oxford University Press 2000) and Early Farming in Dalmatia (with Marko Menđušić, Archaeopress 2019). His degrees are from the University of Oxford (B.A., M.A., D.Phil.) and the University of London (Dip.Arch.).