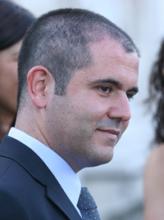 Santo Privitera received his Ph.D. in archaeology and ancient history from the University of Venice in 2008, specializing in Aegean prehistory and protohistory. A former member of the Italian Archaeological School at Athens, he is currently a postdoctoral researcher at the National and Kapodistrian University of Athens. He is also a staff member of the Italian Archaeological School at Athens’ excavations at Hagia Triada. He has widely published on various archaeological periodicals and is the author of three books: Case e rituali a Creta nel periodo Neopalaziale (Athens 2008), I granai del re (Padua 2010), and Principi, Pelasgi e Pescatori: L’Attica nella Tarda Età del Bronzo (Athens 2013).