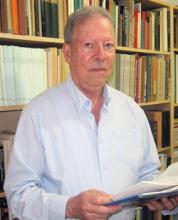 David Ussishkin is professor emeritus of archaeology at Tel-Aviv University, Israel. He received his Ph.D. at the Hebrew University of Jerusalem. Ussishkin conducted surveys and excavations in several biblical-period sites in Israel, notably the Silwan necropolis in Jerusalem, Lachish, and Betar, the last stronghold of the Second Jewish Revolt. He codirected the excavations at Jezreel and the renewed excavations at Megiddo. Ussishkin wrote extensively on subjects of archaeology of the biblical period and Hittite art. His most notable books are the final excavation report of Lachish and The Conquest of Lachish by Sennacherib (Tel Aviv 1982).