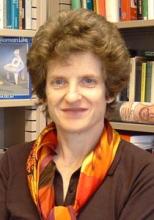 Sarah P. Morris is Steinmetz Professor of Classical Archaeology and Material Culture in the Department of Classics and the Cotsen Institute of Archaeology at UCLA. Her teaching and research include the Aegean Bronze Age, Greek literature and religion, field archaeology (ceramics, architecture, and landscape), and Near Eastern influence on Greek art and thought, with fieldwork in Israel, Turkey, Greece, Albania, and, since 2012, at Methone (Pieria) in Greece. Her publications include Daidalos and the Origins of Greek Art (Princeton 1992), which won the Archaeological Institute of America James R. Wiseman Book Award in 1993; The Ages of Homer: A Tribute to Emily Townsend Vermeule (coedited with J.B. Carter [Austin, Tex. 1995]); Epos: Reconsidering Greek Epic and Aegean Bronze Archaeology (coedited with R. Laffineur. Aegaeum 28 [Liège and Austin 2007]); and studies of finds from Torone (Chalkidike) and the Cave of Zas (Naxos).