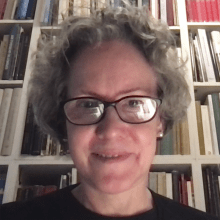 Elizabeth Bartman is an independent scholar specializing in Roman art and its early modern reception. She has published several books and numerous articles and reviews, and held fellowships at the American Academy in Rome, the Metropolitan Museum of Art, Columbia University, and the Center for the Advanced Study of Art. She has had decades of involvement with the AIA, beginning as a local society officer and culminating in the presidency from 2011–2014. Now a Past President, she continues to be connected with the Institute. In 2014 she founded Elifant Archaeo-Culinary Tours with Maureen Fant, a food historian, for which she leads trips to Italy annually.