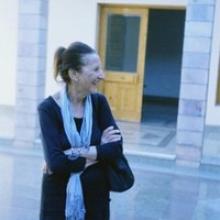 Larissa Bonfante is professor emerita of classics at New York University, long-time member of the Archaeological Institute of America, and member of the German Archaeological Institute and the American Philosophical Society. She is currently working with Helen Nagy on the publication of Highlights of the Antiquities Collection of the American Academy in Rome. She is also preparing for publication the Thomas Spencer Jerome Lectures, which she presented at the University of Michigan and the American Academy in Rome in 2007 and is editing Nudity as a Costume in the Ancient Mediterranean. Her publications include books on Etruscan and Roman dress and Etruscan language and culture, most recently The Barbarians of Ancient Europe: Realities and Interactions (Cambridge 2011). She is founder and coeditor of Etruscan News. In 2007, she was awarded the Gold Medal Award for Distinguished Archaeological Achievement from the Archaeological Institute of America.