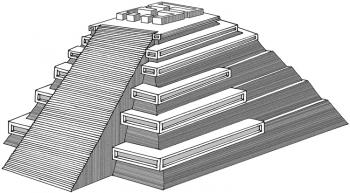 This article examines evidence for external influences on developing Mycenaean architecture, specifically at Pylos, during the Middle to Late Bronze Age. Previous investigation suggests that emerging mainland elites eclectically appropriated foreign material cultural forms, styles, and techniques into established local traditions, most likely for use in localized prestige competition. Although a wealth of previous scholarship has convincingly demonstrated an extensive Minoan impact on the Greek mainland, less work has been done to provide a context for the mechanisms whereby such influence occurred. Considering architecture as a reflection of social structure and employing a dual-processual theoretical framework, we explore the possibility that architectural similarities and differences between Crete and Messenia are material manifestations of varying exclusionary and corporate strategies of sociopolitical power. We subject the Minoan influence at Pylos to a cross-cultural comparison with the Teotihuacano impact on the development of lowland Maya architectural styles and cultural projects in the Mesoamerican Early Classic period. We also discuss what these two case studies teach us about the relationship between interaction, architecture, and social organization in emergent complex societies, in both the Old World and the New World.