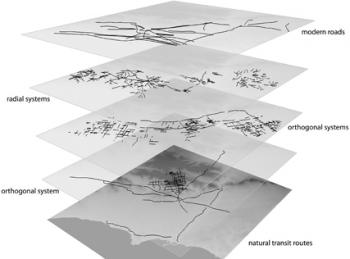 Although centuriation was only one system of Roman land division, its impact on the landscape and its visibility in modern field arrangements make it the most commonly recognized expression of Roman landscapes. Centuriated grid systems are usually analyzed from a materialistic point of view and consequently are regarded as an assertion of Roman dominance over conquered territories. In this sense, their productive function is clear. The hinterland of Tarraco (the ancient capital of the Roman province of Tarraconensis) offers one of the most clearly documented examples of multiple-grid centuriated systems. From 2006 to 2010, the Landscape Archaeology Research Group of the Catalan Institute of Classical Archaeology employed a wide array of digital and field methodologies at Tarraco to record the traces of centuriated land divisions and their Roman origin. Most importantly, these methods have allowed research to move beyond pure description of the traces to explore the concepts and ideas behind the making of a centuriated landscape. By using Tarraco as a case study, this article shows how centuriation was not only a system for dividing the land but also a conceptual appropriation of the landscape based on a strong mythical and religious background.

By Josep Maria Palet and Hèctor A. Orengo