The Naked Reader: Child Enslavement in the Villa of the Mysteries Fresco

The Naked Reader: Child Enslavement in the Villa of the Mysteries Fresco 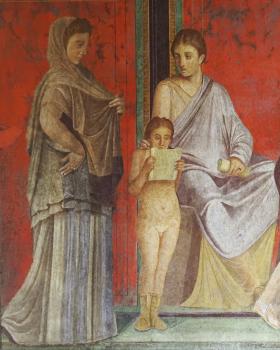 This article analyzes the naked boy who appears as a reader in the fresco cycle of the Villa of the Mysteries in Pompeii, ca. 60–40 BCE. Although this fresco and its many figures have received ample attention, few scholars have asked why the reading boy is naked. I mark the boy’s nakedness as proof of his enslavement, using iconographic and epigraphic evidence for child slaves in Roman-era Dionysiac cult. I also consider a Roman audience’s reception of this boy as decoration for the walls of a Late Republican villa. This image, I argue, worked to reinforce social hierarchies and the eroticization of child slaves, thereby perpetuating cultural systems of subjugation that organize the domestic sphere and the empire more broadly. By way of conclusion, however, I mark the painting’s unabashed acknowledgment of the lived experiences of a child slave as a subtle critique of slaveholding strategies, at least among enslaved viewers.

Content warning: Readers are advised that this article discusses evidence for the sexualization and sexual exploitation of minors, especially enslaved minors.