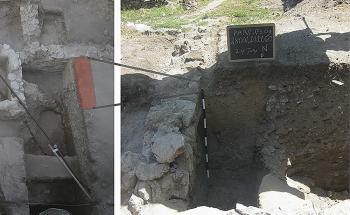 The movement of refuse through an ancient city remains poorly understood despite an increasing body of excavated and published evidence. Urban refuse deposits are commonly attributed to simple discard behaviors: residents casually threw away their refuse, unintentionally forming much of today’s archaeological record. This study reevaluates the formation processes of such deposits with quantitative data. Using an Ostian dumpsite and refuse deposits within Pompeian domestic spaces as case studies, I calculate the values of heterogeneity (richness and evenness) of the artifact assemblages. These values complement the qualitative methods archaeologists use to describe the heterogeneity of artifact assemblages. Crucially, the values are readily comparable and reveal patterns not previously recognized. These patterns indicate that none of the examined Pompeian refuse deposits derived from casual disposal. Instead, the data show that the refuse comprising them was reclaimed from the peri-urban dump and transported to where fill materials were needed during construction projects. Such behaviors reveal an intricate relationship between the residents and their refuse, where systematic reuse applications often followed disposal. The data derived from this study compel us to rethink how refuse deposits were formed, from where the refuse originated, and for what purpose it was deposited.