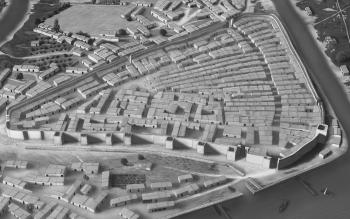 Studies investigating changes in domestic architecture from the Iron Age to the Roman period in the northwestern provinces of the Roman empire have often suggested an important degree of continuity in domestic social relations, although the province of Mediterranean Gaul, Gallia Narbonensis, has been underrepresented in these studies. This article employs access analysis to compare domestic space in Mediterranean Gaul at three preconquest Iron Age settlements (ca. 500–50 BCE) and five Roman-period houses from the first–second centuries CE. This analysis suggests that many Roman houses in Gallia Narbonensis helped structure quite different forms of daily social interactions and encounters through important changes in the physical organization of domestic space. In particular, the communitarian organization of domestic space for the Iron Age settlements seems to have encouraged daily encounters within and between domestic groups through shared, communal spaces, rather than separating social units into coherent sets of rooms that in a modern setting we would consider “houses.” By contrast, in the Roman period internally organized domestic spaces emphasized specialization and internal divisions, structuring socioeconomic distinctions, and in doing so, signaled an important social rupture that contrasts with other provinces of Gaul.