Repositioning the Sea on the Great Altar of Pergamon: A Demonstration of Hellenistic Boat Construction on the Telephos Frieze

Repositioning the Sea on the Great Altar of Pergamon: A Demonstration of Hellenistic Boat Construction on the Telephos Frieze 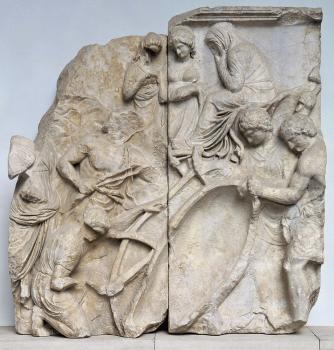 The Telephos frieze of the Great Altar of Pergamon contains a rare testimony of boat construction in the Hellenistic period, portraying specialized tools and working practices in an ancient boatyard. The sculpture documents the building of a small boat, offering rare insight into ancient boatbuilding. The vessel of Auge, mother of the Trojan hero Telephos, is a symmetrical skiff with two rounded ends resembling a coffin, a typology barely evidenced archaeologically. This article notes iconographic idiosyncrasies on the frieze that depart from the principal sources of the Telephos myth in the depiction of the infant accompanying his mother Auge to her watery tomb. To build the boat-coffin shown on the frieze, the trained craftsmen use the bow saw, bow drill, two-handled adze, and mallet and chisel, tools known from shipwrecks but documented only rarely in visual representations. Beyond a close technical examination of these implements, our discussion considers relevant maritime funerary rituals and examines several different ship typologies in relation to the boat depicted on the Telephos frieze. From his mother’s tiny skiff to her son the mythical hero’s mighty warships, their careful portrayal on the altar symbolizes the expansion by Eumenes II (r. 197–159 BCE) of his kingdom into the Aegean.

Repositioning the Sea on the Great Altar of Pergamon: A Demonstration of Hellenistic Boat Construction on the Telephos Frieze
By Emmanuel Nantet, Manuel Berenguel, and Dana Katz
American Journal of Archaeology Vol. 126, No. 4 (October 2022), pp. 483-505
DOI: 10.1086/720807
© 2022 Archaeological Institute of America