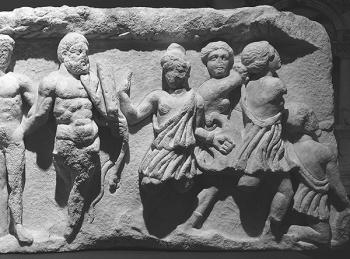 Through an analysis of images of Amazons in their original historical and cultural contexts, this article re-evaluates one of the most iconic subjects in Greek art and its reimagining in Hellenized Anatolia. It argues that in Anatolia, Amazons were regularly depicted not as barbarians from exotic locales but rather as heroes with whom the local population identified. Anatolia was a mythological homeland for the warrior women, and local stories frequently cast the Amazons as an integral part of their histories. The foundation of the Temple of Artemis at Ephesos was attributed to Amazons, and numerous cities, including Smyrna and Kyme, claimed Amazons as eponymous founders and placed their images on coins. In Karia, the axe of the Amazon Hippolyta was a symbol of the region, and on the north frieze of the Temple of Hekate at Lagina, Amazons allegorically represented the people of Karia. For these cities, with their hybridized Greek and Anatolian populations, the Amazons’ gender was integral to their symbolic value, identifying the women as part of a mythical past that played a key role in the formation of civic and regional identities.