Defying Death: A New Interpretation of the Tomb of the Bulls, Tarquinia

Defying Death: A New Interpretation of the Tomb of the Bulls, Tarquinia 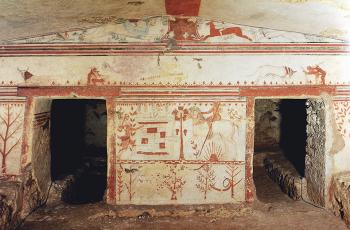 The wall decoration of the Tomb of the Bulls (540–520 BCE) at Tarquinia is a well-cited example of Early Archaic Etruscan tomb painting, incorporating imagery from Orientalizing iconography and combining it with a new emphasis on figural representation emanating from the East Greek world. Most previous scholarship has suggested that the tomb’s paintings cannot be read coherently and that they stand alone in the broader, more intelligible, tradition of Etruscan wall painting. This paper offers a fresh reading of the tomb’s imagery through tracing the possible prototypes that the artist and patron used for formulating the iconography. Central to this reading is a consideration of the architecture of the tomb and the design of the imagery in relation to the architecture. New interpretations are proposed for the Achilles and Troilos scene and for the two representations of sexual activity on the rear wall of the tomb’s antechamber. The paintings pertain to broader concerns relating to fertility and fecundity, which were critical issues in an aristocratic society. When the tomb is interpreted considering the influences underpinning its creation, namely vase painting and architectural iconography, it is possible to determine a coherent and rational message.