A Ptolemaic Hoard from Patara

A Ptolemaic Hoard from Patara 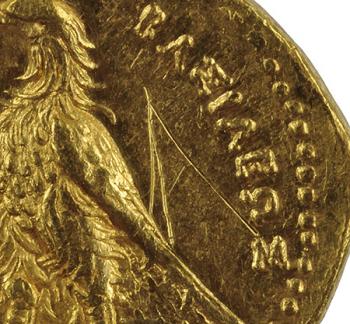 The recent excavations in Patara, Turkey, one of the important port cities of the Lycian region, enabled access to new important data about the Ptolemaic presence in the city and the region. The subject of this study is 19 gold trichrysons found in a bundle formed by two lead plates wrapped together. Fifteen of these coins were struck in Alexandria, and four others were from Cyprus, probably Salamis or Kition. It is the first Ptolemaic hoard found in an archaeological excavation in the Lycian region. It comes from the Tepecik settlement in Patara, which served as a garrison for Ptolemaic soldiers. The hoard in all likelihood belonged to a military officer or commander. We propose that it was buried during the First Syrian War, before ca. 272/1 BCE.