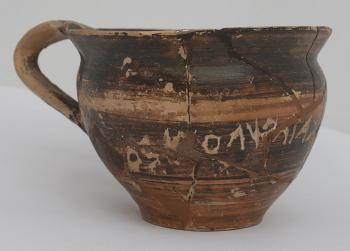 Early Greek alphabetic writing has received extensive attention in the literature. Yet such writing is often treated as immaterial, both literally and metaphorically. My study addresses this problem by offering a systematic investigation of the material properties of nearly 300 inscribed objects, mostly ceramic, that date from ca. 750–600 BCE and originate from seven sites across the Greek world. Inspired by work on classical art and text, and on the materiality of writing, I use a quantitative approach to investigate the ways in which early inscriptions interact with the fabric, the shape, and the decoration of the vessels on which they are rendered, reflecting also on the ramifications of this interaction for the socialization of early Greek inscribed objects in diverse contexts. The investigation exposes a range of hitherto neglected patterns attesting to the preferential inscribing and use of particular types of vessels in specific sites or contexts, and to the association of certain types of text with the material properties of the medium that carries it. More broadly, I argue that Greek epigraphy would benefit from methodologies that promote the documentation and interpretation of not only the textual but also the material properties of inscribed objects.