Forging the Roman Rural Economy: A Blacksmithing Workshop and Its Tool Set at Marzuolo (Tuscany)

Forging the Roman Rural Economy: A Blacksmithing Workshop and Its Tool Set at Marzuolo (Tuscany) 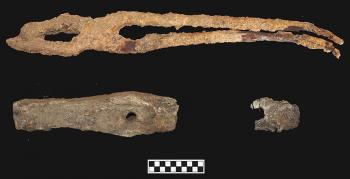 As an Early Imperial rural site of approximately two hectares in the hinterland of southern Tuscany with evidence of crafting and dwelling, Marzuolo belongs to an expanding and diverse group of known Roman minor centers. Between 2017 and 2019, excavations at Marzuolo revealed a blacksmithing workshop that was in operation in the first half of the first century CE and was violently destroyed in a fire and abandoned thereafter. As a result, the Marzuolo smithy presents a unique opportunity to investigate a “living” workshop, complete with its ephemeral features, worked objects, and comprehensive tool set. After reconstructing the chaîne opératoire of blacksmithing in its spatial setting at Marzuolo, this article integrates the rare find of the in situ tool set to argue for both a greater geographical, social, and functional pervasiveness of metals in the Roman countryside than has hitherto been acknowledged and for the importance of minor centers in forging the ties that bound a dynamic rural economy.