The Boxing Writer Paul Gallico on the Terme Boxer

The Boxing Writer Paul Gallico on the Terme Boxer 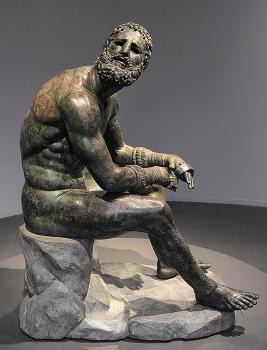 The statue of a seated boxer, discovered by Rodolfo Lanciani on the Quirinal Hill at Rome in 1885 and now in the Terme Museum, is today one of the most celebrated Hellenistic bronzes. This article focuses on a reexamination of the Terme Boxer. It argues that what has been largely lacking in the scholarly literature has been an analysis of the sculpture by someone with an expert knowledge of the sport of boxing. What may be gained by such knowledge is illustrated by examining an unpublished analysis of the Boxer and his likely fighting style by Paul Gallico, the well-known American boxing commentator. This is contained in a letter that he wrote to the British archaeologist and art historian Eugénie Strong in 1935, after he had examined the statue for a second time in Rome. The analysis also appears fictionalized in a scene in one of Gallico’s published short stories, but that reading of the statue has apparently gone unnoticed. This article concludes with an assessment of the significance of Gallico’s interpretation of the Terme Boxer in the context of the scholarly literature and the statue’s modern popular reception, especially by boxers.