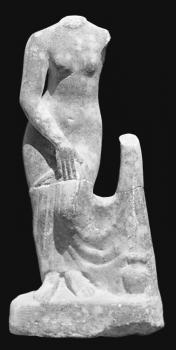 This article identifies a group of marble statuettes of Aphrodite that were probably carved on Delos during the late second and first centuries BCE. The statuettes date to a critical period in the history of Graeco-Roman art when the production of classical-looking forms in marble was intensifying amid growing demand from private consumers. By gathering these statuettes and documenting their findspots, it is possible to reconstruct the responses of one group of Greek sculptors to the contemporary art trade. The emergence of a wide market for statues based on earlier works is usually attributed to the appetites of a wealthy clientele based on the Italian peninsula; however, this group of statuettes demonstrates a different pattern: consumption centered exclusively in the eastern Mediterranean basin. Long-held views that frame the copy industry as a phenomenon of Roman influence and demand have focused narrowly on ancient authors such as Cicero and on shipwrecked cargoes that lack certainly identifiable destinations. Italian buyers undoubtedly played a pivotal role in the expansion of the Late Hellenistic marble-carving industry, but local and regional communities in Greece also formed a substantial consumer constituency. The article concludes by reconsidering the artistic relations between Delos and Athens during the Late Hellenistic period.