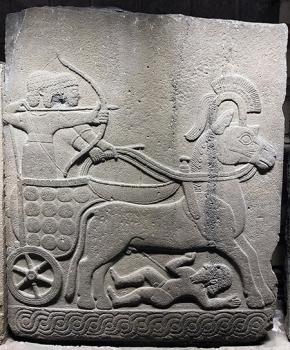 The residents of Syro-Anatolia appear in heterogeneous costumes in ninth-century BCE Assyrian representations. People from the same city may don different accoutrements that include caps, hairbands, sandals, and shoes with upturned toes. A similar diversity characterizes contemporaneous self-representation of elites at Zincirli in the Outer Citadel Gate and comes to proliferate in eighth-century monuments from sites including Karatepe and Marash. I argue that Assyrian artists recognized heterogeneous costume as a culturally salient feature of Syro-Anatolian art and adapted it in their own representations of the region. This observation has implications for our understanding of Ashurnasirpal II’s well-known procession on the courtyard facade of his throne room. When the entire scene is viewed, the combination of accoutrements evokes Syro-Anatolia. However, because Assyrian representations of Syro-Anatolian fashion combine disparate elements that are otherwise characteristic of other regions, the figures can also be viewed individually as representatives from any number of kingdoms. The artists were thus able to harness the diversity of one area to create figures comprehensible to visitors from across the empire. This representational strategy encouraged individuals from different kingdoms to see themselves reflected on the palace walls, forever frozen in a posture of reverent submission.