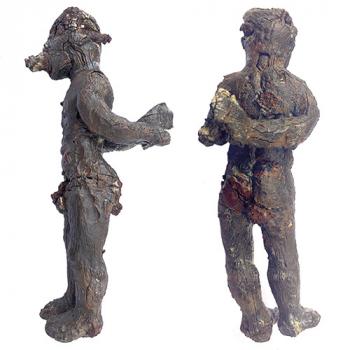 This article publishes a cast-lead figurine from the early fourth century BCE, excavated in a tile grave on the Cycladic island of Paros. The figurine was pierced with seven iron nails, the arms were bound behind the back, and a lead collar shackled the neck. Inscriptions on the body in the epichoric Parian alphabet suggest that the object was produced locally. The aggressive nailing, binding, shackling, inscribing, and modulation of the figurine, combined with the mortuary context and abundant parallels, suggest that the object was ritual in nature, implicated as an effigy (κολοσσός, Rachepuppe, or so-called voodoo doll) in a binding curse. Examination of the object in relation to the growing corpus of curse effigies sheds new light on private curse rituals, onomastics, the local Parian script, and notions of sexuality and competition in the classical Aegean.