Excavating and Conserving Europe's Oldest Books: A Papyrus from Mangalia on the Black Sea (P. Callatis 1)

Excavating and Conserving Europe's Oldest Books: A Papyrus from Mangalia on the Black Sea (P. Callatis 1) 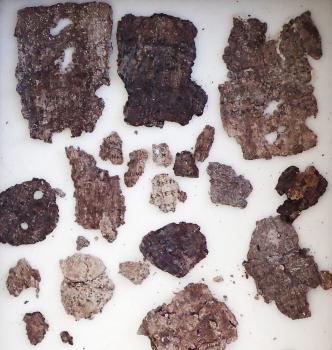 In 1959, the oldest book that had then been found in Europe, a scroll of papyrus datable to ca. 350–325 BCE and here named P. Callatis 1, was discovered in an imposing tomb of Macedonian type at Callatis (Mangalia, Romania) on the west coast of the Black Sea. In 2011, it was recovered in Moscow and returned to Mangalia. The polymer used to conserve it obscures its 224 fragments in visible light, but digital infrared microphotography suggests that it contained a Greek work on Persian history. Since Xenophon attests to an extensive trade in books across the Black Sea, many papyrus rolls probably survive in shipwrecks on its anoxic seabed. We end this article with recommendations for the preservation and recording of papyri that are found in humid environments.