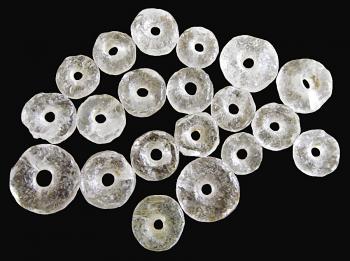 Başur Höyük in southeast Turkey lies at a critical crossroads linking Mesopotamia, Anatolia, and Caucasia. The site was excavated as part of the Ilısu Dam and Hydroelectric Power Plant (HEPP) project rescue excavations. During the Early Bronze Age I (3100–2900 BCE), a cemetery was created in an area previously occupied by an Uruk settlement. A stone cist grave and accompanying outer area contained several burials. Bodies interred outside the main stone chamber are thought to be the victims of human sacrifice as part of a retainer burial practice previously documented at Arslantepe and Ur. The grave contexts host an assemblage of personal ornaments that were deposited with those interred both inside and outside the stone chamber. This article considers the more than 30,000 recovered beads in light of social context, material procurement, use and value, technology, and relative differences in status of the occupants of the grave. The data are used to identify both how different identities were structured by the Early Bronze Age I residents of Başur Höyük and how the location of the site at a meeting point of trade routes and regional powers influenced material culture and social behavior in the region.