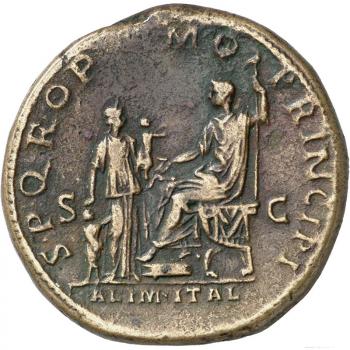 Of the many interpretive puzzles presented by the so-called Anaglypha Traiani, a pair of Roman imperial reliefs today located in the Curia Julia, one special curiosity is their depiction of a tree, commonly identified as the Ficus Ruminalis, otherwise rendered naturalistically but shown as if growing directly out of a stone base or pedestal. Close interrogation of this feature yields two important avenues of investigation. The first is a matter of historical realism, concerning how living trees were incorporated into the Forum Romanum in real life and thus how we should conceive of the Ficus Ruminalis itself. The second pertains to the use of the base as a formal device, one which activates—in concert with multiple architectonic platforms across the two panels—a sophisticated interplay between the “living” and the “monumental.” This approach reveals a careful design in which the monuments in the reliefs’ foregrounds were selected on both symbolic and historical grounds. Ultimately, this analysis paves the way for a new reading of the two panels as a pair of distinct ideological visions, united within an overarching temporal framework that emphasizes continuity among Rome’s origins (the Ficus Ruminalis) and republican institutions (the Marsyas statue) and its imperial present, as well as between one emperor and the next.