The Poetics of the Cretan Lion: Glyptic and Oral Culture in the Bronze Age Aegean

The Poetics of the Cretan Lion: Glyptic and Oral Culture in the Bronze Age Aegean 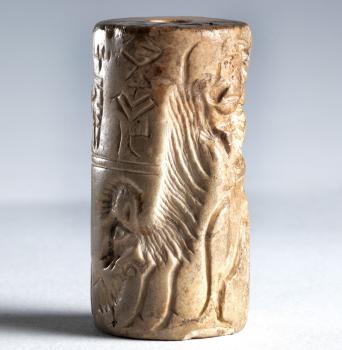 This article rethinks the presence of the lion in Bronze Age Crete and its participation in poetic culture in the Aegean. In the absence of living lions on the island, representational embodiments were the basis of people’s encounters with the species, and the peculiarities of these object-bodies powerfully contributed to the characterization of the beast. Throughout the Bronze Age, the vast majority of Cretan lion representations occurred in glyptic. Seals were worn on persons’ bodies, consistently placing the leonine in direct relation to the human; this juxtaposition had both physical and cultural dimensions and was invigorated by the spatiotemporal dynamism of seal use. This paralleling of human and beast is considered in its lived context, including its likely relationship to oral traditions, especially the comparison formulated by similes. In the period from Middle Bronze III to Late Bronze II, after centuries of development in Crete, the lion’s association with glyptic extended to the early Mycenaean mainland. This was a moment of intense intra-Aegean sharing that had linguistic, practical, and material dimensions and that likely saw the birth of the epic tradition. I argue that the beast’s persistent position in glyptic contributed to the formulation of Aegean poetic culture, configuring a lasting but fluid parallel between lions and humans.