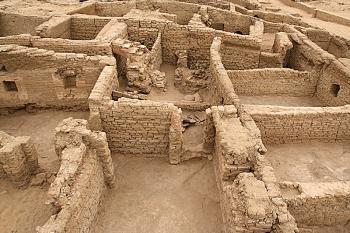 This article explores ways in which the sacred landscape of Egypt’s Western Desert changed in the fourth and early fifth centuries CE with the advent of Christianity. The oases of Kharga and Dakhla, in particular, offer a wide range of archaeological and documentary evidence on the development of Christianity. The landscape of the oases was dotted with churches, the construction of which at times occurred within a preexisting—and densely built—setting and often involved substantial alterations to the surrounding built environment. The focus of this article is on the reuse and reorganization of space at the agricultural hamlet of  ʿAin el-Gedida, located in Dakhla Oasis. Excavations at the site revealed extensive evidence of a church complex, dated to the fourth century, located to the east of a mudbrick temple that by that time was no longer in use as a cultic place. This article discusses how the spatial arrangement of the built environment was readapted to accommodate the construction of the church complex. These changes affected not only the configuration of several buildings but also the surrounding network of streets and passageways, thus reshaping patterns of movement at the site.