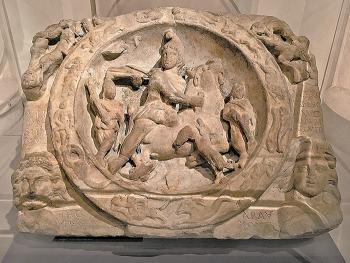 Much has been written on the religious aspects of life in the Roman military community, but the role of soldiers as temple patrons has rarely been discussed, even though temples and shrines have been found at military settlements across the Roman empire and many temples situated in urban areas have produced evidence of financial support from soldiers. Thus, exploring the relationship between military communities and temples is important for our understanding of the religious dimension of these communities and, moreover, of wider developments in temple-based worship in the Roman empire. Indeed, the emperors of the late third century CE came from this social milieu, and their disposition toward temples would have been affected by their experiences during military service. I demonstrate here how and why support for temple construction, repair, and expansion among the military communities in two of the most militarized provinces, Britain and Pannonia, decreased dramatically after the early third century and why certain temples (Mithraea and Dolichena) did not similarly decline. This examination also reveals how the changing relationship between military communities and temples influenced the attitudes of late third-century emperors toward temple construction and repair.