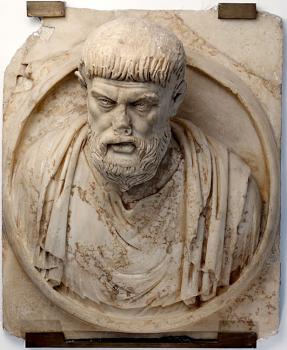 This article presents an analytical study of the Late Antique sculptural relief program at the Roman villa of Chiragan (Martres-Tolosane, Haute-Garonne), which includes a series of mythological panels and a portrait in relief. Although Chiragan’s reliefs have long been associated with Aphrodisian workshops, this study marks them as products of a local workshop, based on stylistic traits and recent scientific analyses of the marble. Using comparanda found in a series of Late Antique portraits from Chiragan, I date the reliefs to the later fourth or early fifth century CE. I also consider evidence for an honorific relief portrait at the villa that, together with the program of architectural relief sculpture, makes explicit reference to a distinctly urban visual rhetoric. In conclusion, I argue that Chiragan’s reliefs actively court association with the urban sphere, which in turn suggests the increasing importance of the villa as a sociopolitical locus in the Late Roman West.