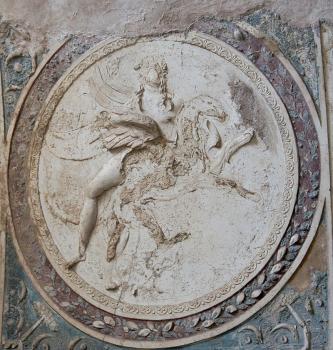 Baths played an essential role in the formation of the ideal Roman male. As a locus of demonstrating one’s belonging to the Roman citizenry through a collective act of cultus, in the face of public nudity and against the threats of mollifying luxury and superstitious beliefs, baths intensified the negotiation regarding the norms of masculinity. The decoration of the tepidarium of the Forum Baths in Pompeii can be read in light of these tensions. It presents two sets of naked male figures from different eras: burly telamon statues from a republican phase of the baths and stucco reliefs of sexually attractive youths from the last decade before Pompeii’s destruction in 79 CE. In this study, I attempt to look at the decoration from the point of view of the Roman bathers, and I contextualize the decoration both archaeologically and iconographically to determine the frames of its reception. I analyze how Roman masculinity was constructed in the process of identification with the normative ideal through the images. From this perspective, two main tensions emerge: one between self-control and the fertile force of the irrational embodied by the telamones, another between homoerotic desirability and heroism represented by the stuccoes. The bathers stood in the midst of these tensions.